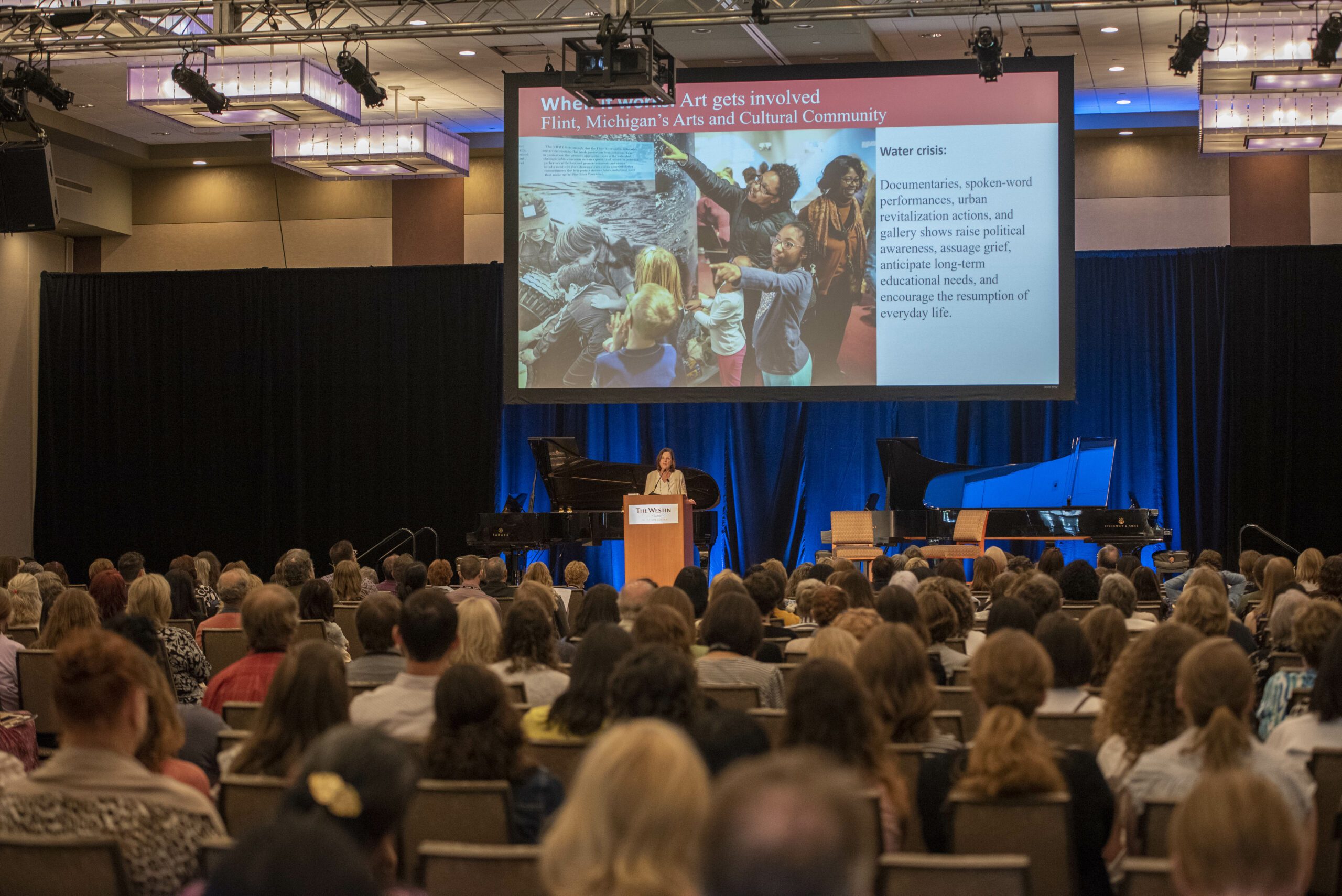 A SEAT AT
THE PIANO

Noted for her musical command, cosmopolitan artistry, and visionary independence, Sara Davis Buechner is one of the most original concert pianists of our time. Lauded for her “intelligence, integrity and all-encompassing technical prowess” (New York Times), “thoughtful artistry in the full service of music” (Washington Post), and “astounding virtuosity” (Philippine Star), Japan’s InTune magazine sums up: “Buechner has no superior.”

Ms. Buechner has performed in every state and province of North America — as recitalist, chamber musician and soloist with top orchestras like the New York Philharmonic, San Francisco Symphony and Philadelphia Orchestra; and in venues such as Carnegie Hall, the Kennedy Center and the Hollywood Bowl. She has toured throughout Latin and South America and Europe; and she enjoys a special following in Asia, where she has been a featured soloist with the Sydney Symphony, New Zealand Philharmonic, New Japan Philharmonic and Shanghai Philharmonic, among many others.

Ms. Buechner has released numerous acclaimed recordings of rare piano music by composers such as Rudolf Friml (“a revelation” — The New York Times), Dana Suesse, Joseph Lamb, Joaquín Turina, Miklós Rózsa, and Ferruccio Busoni (including the world première recording of the Bach-Busoni “Goldberg” Variations). Stereophile magazine selected her Gershwin CD as “Recording of the Month,” and her interpretation of Hollywood Piano Concertos won Germany’s coveted Deutsches Schauplatten Preis. Most recently her recorded traversal of the score to Carl Dreiser’s silent movie classic Master of the House (1925) may be heard on Criterion Collection DVD.

Sara Davis Buechner joined the faculty of Temple University’s Boyer College of Music and Dance in 2016, after previously teaching at the Manhattan School of Music, New York University and the University of British Columbia. She has presented masterclasses and workshops at major pedagogic venues worldwide, adjudicated important international piano competitions, and is also a contributing editor for Dover Publications International. In 2017 Ms. Buechner marked her 30th year as a dedicated Yamaha Artist.

As a proud transgender woman, Ms. Buechner also appears as a speaker and performer at important LGBTQ events, and has contributed interviews and articles about her own experience to numerous media outlets worldwide.

Sara is a dual American-Canadian citizen who makes her home in Philadelphia.

Russian-American pianist Olga Kern is now recognized as one of her generation’s great pianists. She jumpstarted her U.S. career with her historic Gold Medal win at the Van Cliburn International Piano Competition in Fort Worth, Texas as the first woman to do so in more than thirty years.

In recent seasons, Kern performed with the Moscow Philharmonic, Santa Fe Symphony, and the St. Louis Symphony, as well as opened the Pacific Symphony’s 2018-19 season. Kern was also a featured soloist for the Royal Scottish National Orchestra during the 2018-19 Tour. She also served as Artist in Residence for the San Antonio Symphony’s 2017-18 season and had her debut with the National Youth Orchestra on their China tour. Ms. Kern opened the Baltimore Symphony’s 2015-2016 centennial season with Marin Alsop. Other season highlights included returns to the Royal Philharmonic with Pinchas Zukerman, Orchestre Philharmonique de Nice with Giancarlo Guerrero.

Ms. Kern’s discography includes her Grammy Nominated recording of Rachmaninoff’s Corelli Variations and other transcriptions (2004), Brahms Variations (2007) and Chopin Piano Sonatas No. 2 and 3 (2010). She was featured in the award-winning documentary about the 2001 Cliburn Competition, Playing on the Edge.

Joyce McCall was appointed to the faculty at Arizona State University in 2021 where she teaches undergraduate and graduate courses in the School of Music, Dance, and Theatre. Previous appointments include the University of Illinois at Urbana-Champaign where she served as an assistant professor of music education, and the Indiana University Jacobs School of Music where she served as a postdoctoral resident scholar and visiting assistant professor in music education.

McCall’s research—positioned within the context of frameworks like critical race theory and double consciousness theory—centers on how race and culture impact educational equity in music learning and teaching. Additionally, she examines how certain pedagogies such as culturally relevant teaching influences learning outcomes among minoritized racial populations in the music classroom. She has presented sessions and research at the American Educational Research Association, the College Music Society, the Midwest Band and Orchestra Clinic, the National Association for Music Education, and the Society for Music Teacher Education, and published manuscripts in Action, Criticism, and Theory for Music Education, Journal of Music Teacher Education, the Desert Skies Symposium on Research in Music Education. In her most recent publication titled “Straight, No Chaser: An Unsung Blues” in the Handbook of Critical Race Theory (2nd edition), McCall employs critical race theory to illuminate how systemic racism in U.S. college music programs, particularly their music education programs, have contributed to what she refers to as an unsung blues, a collection of blues stories that have yet to be performed by those to whom they belong. These blues stories, or rather choruses of an unsung blues, reflect how Black voices as their music, culture, and epistemological perspectives have been excluded, fabricated, and filtered through frameworks of Whiteness and White, Eurocentric dominance. To confront countless choruses of an unsung blues and provide a better path forward to realizing substantive change among U.S. music schools and their music education programs, McCall suggests that they look to cultural artifacts such as Thelonious Monk’s “Straight, No Chaser” and his compositional and performance styles.

McCall has proudly served as a clarinetist and saxophonist in the United States Army Bands from 1999 to 2013. During her service, she was awarded the Army Achievement Medal, the National Defense Service Medal, and the Global War on Terrorism Service Medal. Previous assignments include the 151st Army Band in Montgomery, Alabama; the 41st Army Band in Jackson, Mississippi; the 36th Infantry Division Band in Austin, Texas; and the 108th Army Band in Phoenix, Arizona. She is a member of Delta Sigma Theta Sorority, Incorporated and Sigma Alpha Iota International Music Fraternity for Women.

There was one overwhelming reason Karen Zorn accepted the position of President of the Longy School of Music in 2007. The school’s newly adopted mission – “to prepare students to make a difference in the world” – was unlike that of any other conservatory in the world. The mission suggested a fundamentally different approach to music education. And it offered a radically different view of the kind of work that Longy students might seek, create, and engage in after graduation.

In pursuit of this mission, Zorn has led Longy through a dramatic transformation. A fearless educational entrepreneur, Zorn has established partnerships, programs, and initiatives that have permanently altered the school’s trajectory and positioned it as a leader in equitable music education.

She executed the pivotal merger with Bard College in 2012 and has since established numerous strategic partnerships with organizations such as the Los Angeles Philharmonic, FundaMusical of Venezuela (El Sistema), the Music for Healing and Transition Program, and countless Sistema-inspired programs across the country. Zorn cofounded Take a Stand, a collaboration between Longy, the Los Angeles Philharmonic, and Bard College, and launched the Master of Arts in Teaching degree program in Los Angeles—the first-ever degree program to be offered in conjunction with a major orchestra.

In 2013, she established the Longy Sistema Side-by-Side program on the school’s Cambridge campus, bringing high quality music education to hundreds of students from under-resourced communities throughout the northeast, and offering hands-on teaching and mentorship opportunities for conservatory musicians. Recognizing the immense impact of this program, Zorn expanded musical education opportunities at the school, opening a Master of Music in Music Education degree program in 2020.

Soon after assuming leadership of Longy, Zorn realized that preparing students to make a different in the world would require a radically different kind of music education.

During Zorn’s tenure at Longy, the school entirely redesigned its curriculum to ignite students’ agency, eschewing traditional requirements to offer practical tools for a variety of careers in music.

Longy has pioneered a new coaching program, empowering each student to create their own individualized path in school and beyond. In 2017, Longy launched the Music as a Healing Art program, which offers students the chance to bring their talent to a diverse array of hospitals, elder care facilities, and transitional housing centers. In 2019, under Zorn’s leadership, Longy spearheaded a multi-year Diversity in Repertoire initiative which requires at least 25% of all repertoire studied and performed at Longy to be written by composers of historically underrepresented identities in classical music. Longy implemented an overhaul of the undergraduate theory curriculum to decenter the Western white male frame. In 2021, Longy piloted the school’s first fully online Master of Music in Music Education degree, expanding access to culturally responsive music education globally.

To provide meaningful professional experience for Longy’s students, Zorn has helped Longy forge numerous partnerships with artistic organizations including A Far Cry, Boston Camerata, Boston Early Music Festival, Boston Opera Collaborative, Castle of Our Skins, Celebrity Series Boston, the Imagine Orchestra, and the New Gallery Concert Series, among many others. She has spearheaded numerous opportunities for Longy students to teach and perform in public schools, community centers, prisons, and other external venues where the traditions of music education can contribute to public life.

Zorn is an active teacher, guest speaker for keynote addresses, and frequent consultant for arts organizations and other non-profits on matters of creative artistry, curricular innovation, and leadership. She appears annually at the Verbier Festival, where she teaches courses on artistic innovation and audience engagement. She has taught of the Banff Artist Residency Program, Carnegie Hall, and has been a member of the faculties of Berklee, MacPhail Center for the Arts, and the University of Missouri, Kansas City.

Zorn has held positions on the Boards of the Community Music Center of Boston, The Creativity Foundation, and the Frances Clark Center for Keyboard Pedagogy. In 2014, she was recognized Musical America’s Profiles in Courage.

Prior to her tenure at Longy, Zorn served as Associate Provost at Berklee College of Music, where she forged a global network of partnerships with organizations including the Royal Academy of Music in London, the Rimsky-Korsakov Saint Petersburg State Conservatory, and the Sorbonne Université. She held the roles of Acting Director and Director of Instruction at MacPhail Center for the Arts in Minneapolis.

A Wisconsin native and Boston resident, Zorn is herself a classically trained musician, having been educated as a pianist at Goshen College in Indiana and later receiving a master’s degree in piano performance at the University of Missouri, Kansas City.